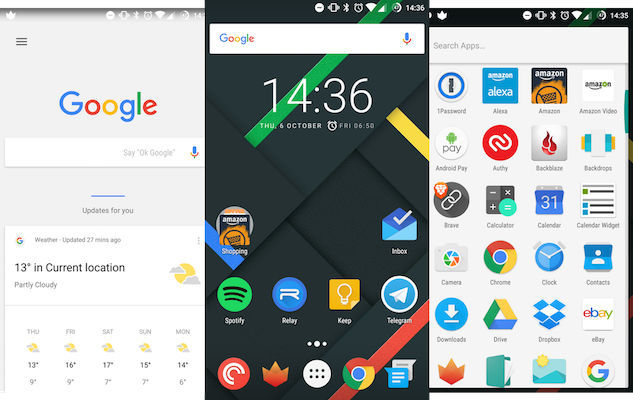 If you follow me on Twitter, you probably already know I've ditched my iPhone in favour of a OnePlus 3. The biggest hurdle to switching is the apps I used regularly (and some not-so-regularly). After making a list of apps I had installed on my iPhone, I was able to filter it down to just two lists: ones with no equivalent, and ones I needed to find an Android alternative for. The three with no equivalent were:

None of these will make a massive difference to my life, but I will definitely miss Blink and Plot. The following apps are ones I need replacements for:

I haven't been able to find anything that is as easy for creating lists as Clear but Google Keep's lists feature does the job reasonably well and also doubles as a good replacement for Apple's notes app.

I switched to Google Inbox prior to buying the OnePlus and it manages to show delivery tracking inline with the email so I decided I didn't need Deliveries anymore. Dan also told me Google Now should tell me about my deliveries based on my email, but I haven't seen that working yet. Google Now also has a reminders feature, which has mostly replaced Due.

The stock Google calendar app and widget replaced Fantastical for what I needed with no problems.

Tweetbot is a solid app and I knew finding a decent alternative would be hard given Twitter's disdain for third party developers. Fenix for Twitter has most of the features I want from a Twitter app, and the design is fantastic.

TV Series, as of right now, seems like a pretty good app although I'll need a few more weeks to know if it works as well as iTV Shows which I was using on iOS. Overcast and Narwhal are both fantastic apps, but also reasonably easy to find quality Android equivalents. I replaced them with Pocketcasts and Relay respectively.

Overall, I'm really pleased so many of the apps I used have Android and iOS versions, because it made switching much easier. And, despite what some in the Apple community have you believe, the Android-only apps that I've tried are really great quality and on par with their iOS equivalents. And someone should show Apple how great installing apps from the Google Play site is, because it's a damn sight easier than opening iTunes.