Thoughts on OnePlus 3 and Switching to Android

If you want to hear more about this, or just prefer listening over reading (hi Myke), I spoke about this with John on episode 30 of our podcast, Ruminate. Find it in Overcast, Pocketcasts, or iTunes, or any other podcast app you use.

I wrote about replacing all my apps on Android just under a week ago, but I wanted to lay out some of my thoughts about the OnePlus 3 and Android in general.

Firstly, I've had a few people ask why I switched to Android. There wasn't a single reason but a plethora of little things that started to bug me about iOS. First off, as I discussed here, I'm no longer using iTunes because of how buggy it is when downloading music, as well as it constantly messing up my album artwork. Without iTunes, the only thing locking me into iOS was iMessage and I realised I could live without it. After the "upgrade" to iOS10 a lot of things bugged me about it. In no particular order:

All of the above made me hate using my phone and on top of all that the way I use my phone has changed significantly in the past year so I decided the best thing for me to do was to switch to Android.

I won't be going in depth into the phone but MKBHD reviewed it here. The OnePlus is similar in size to the iPhone 7 plus and after a few days of using it my iPhone 6 felt ridiculously small; turns out Myke was right.

The OnePlus build quality is not quite as nice as an iPhone, which I expected, but it is still a really nice device. The thing I love the most about it is the fingerprint unlock. Not only has it never failed to read my fingerprint but it's also really fast, as you can see in this video.

Dash is OnePlus's quick charging feature that uses their dash charger and cable. I'm able to charge my phone from ~15% to 70% in about 30 minutes, and another 15 to reach the full 100%. Because of this I've started charging my phone in the evening before I go to bed and the battery lasts the entirety of the next day well into the late evening before I need to charge again. It's worth noting that dash charging only works with both the USB plug and the dash cable, so it won't work with third-party USB cables.

OnePlus 3, like the previous models, has an alert slider on the side to switch between silent, priority notifications, and all notifications. This is really useful and not something that appears on a lot of Android phones (although the modes exist as a software feature). By default priority includes alarms, music, messages, and phone calls but any app can be treated as priority in the global notification settings. Coming from an iPhone, it's nice to have a physical switch and as someone who had a lot of old Nokia phones I love having a modern equivalent of profiles. I use silent for when I'm sleeping, priority for when I'm at work, and all for any other time.

The OnePlus runs OxygenOS which is a slightly modified version of stock Android, currently on 6.0 Marshmallow. Although it's frustrating to not have the latest version of Android, I'm pretty happy with it and OnePlus have confirmed they are working on an Android N update which should be out in the next few months.

The camera is no iPhone competitor but the photos it takes are pretty good. I don't take a lot of photos with my phone so this isn't massively important to me, but your mileage may vary. 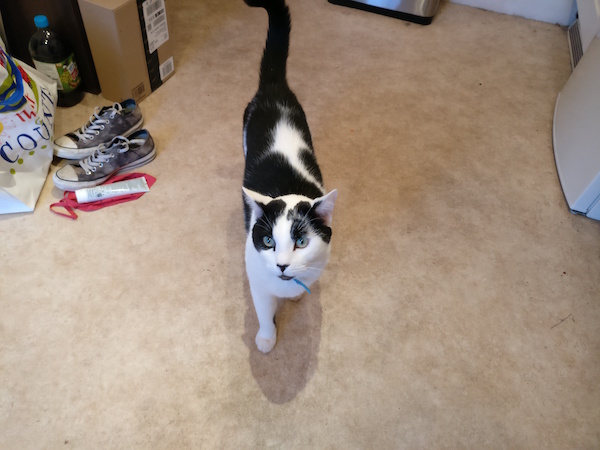 Lets be honest, it's a slab of glass with some buttons next to it. It's not the world's greatest device but it's nowhere near the worst and for £330, you can't go wrong.

Android is much as you'd expect; it's a mobile operating system that has apps, widgets, notifications, just like iOS. There are, however, some significant differences. Some of them I like, some not so much.

Being able to install an app from the Google Play store from my Mac (and choose which device to install to) is so natural, and works so well, that I'm amazed Apple hasn't implemented this. Opening iTunes seems archaic in comparison. Once I'd downloaded a few apps, I was impressed with Google's ability to suggest apps tailored to my interests, something which Apple have been trying to do for years on the App Store with little success (remember Genius for Apps?).

The home screen(s) is where Android differs significantly; I can put apps wherever I want, and have widgets all over the place. This is the biggest improvement using my phone day-to-day because if I only want four apps on the home screen, they don't have to be right at the top of the screen. The left-most home screen is Google Now which shows weather, news, and a host of other "cards" based on emails and apps I use (for example, it now shows me my eBay saved searches). It's supposed to show me delivery information based on my emails, but this might be disabled for Google Apps accounts so I don't get the benefit of this. I currently have two home screen; one with my most used apps and the Pocketcasts widget, and one with some lesser used apps and the Spotify widget. Apps that aren't on either home screen can be accessed through search or from the app drawer.

Setting default apps is great (I swapped out the default SMS app for Textra) but the best part about setting defaults is opening specific type of links and files in specific apps. For example, all Twitter links open in Fenix and all Reddit links open in Relay. This is so much better than ending up on the mobile Twitter site when I have a perfectly good Twitter client installed. Talking of opening links, Link Bubble is fantastic. When I click a link in Twitter, for example, it shows a floating bubble on my screen which will expand once the page has loaded. Being able to scroll through Twitter, open a bunch of links, and then review them all at once is amazing. 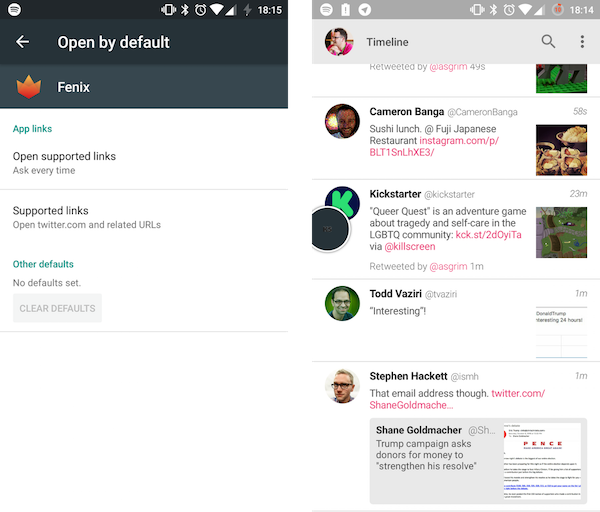 One of the things I thought I'd miss most is sending messages from my Mac through the Messages app. Push Bullet fixes this by allowing me to mirror all notifications to my Mac, send messages, send files between devices, and interact with the notifications just like I can on the phone. It also has a bunch of other really useful features. I was concerned that apps like this might massively affect battery life, but this hasn't been the case.

Something I wasn't able to work out was how to choose where to output audio when I'm connected to a Bluetooth device. On iOS, the "AirPlay" menu serves this function. I looked around for a solution to this but came up short so if anyone knows of an app that might fix this, let me know. Speaking of Bluetooth, unlike iOS, there is no way to see the battery life of Bluetooth devices like headphones. Although not a huge problem, it's frustrating that Android lacks this feature.

On iOS both the banking apps I used, HSBC and Lloyds, allowed me to use TouchID to login. On Android, this isn't the case, despite Android having support for such a system (PayPal use it). This, I assume, is because not all Android phones have fingerprint sensors so there's a smaller market for it. Again, not something I can't deal with, but a pain none the less.

I'd be remiss if I didn't mention the clusterfuck that is Amazon's presence on Android. I wanted to download the Amazon Video app but the Play Store said it wasn't compatible with my device, which seemed odd. When I asked Dan, he informed me I should download it through the normal Amazon app. Except my Amazon app didn't have the option he showed me because I downloaded the Amazon app from the Play Store and not the Amazon Underground app which is a combination of the standard shopping app, plus an app store. To download the Underground app, I had to turn off the security setting to only allow apps from trusted sources. Then, and only then, was I able to download the Amazon Video app from inside that app. What.

I'm pretty happy with using Android. I don't do Real Work™ on my phone and mostly use it for Twitter, phone calls, and buying stuff on Amazon when I'm not at my Mac. Almost any problem or tweak I want to make I can through apps or widgets; Android definitely feels like it's geared more towards power users and people who want to tinker with settings or "fix" things but that's perfect for me.

Finally, because the Apple Watch doesn't work with Android, I'm getting rid of it. As I said on Twitter the only thing I miss is not being able to quickly see the time so I'm currently eyeing up one of these.